Is 3D Printing About To Go Mainstream? 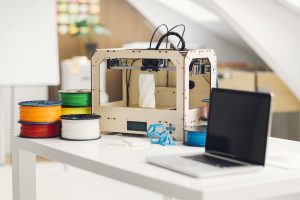 What Is 3D Printing?

As the name suggests, 3D Printing is the process of designing and layer-by-layer building a three-dimensional object typically from polymers, metals and ceramics although other materials such as carbon, concrete and wood can also be used.

The global 3D printing market was valued at c.$10 billion at the end of 2019, with growth expectations of 20-30% compound annual growth rate (CAGR) to reach around $30 billion by the end of 2024 (source: Market Data Forecast).

For comparison, the global manufacturing value add in 2018 was c.$14 trillion (source: World Bank) hence whilst 3D Printing is growing fast it is from a small base.

To help answer the question on whether 3D Printing can breakthrough as a mainstream manufacturing process, we need to understand the market structure and dynamics.

How Is The 3D Printing Market Structured?

A fundamental concept in strategic marketing is that of market segmentation.

Why is it important?

Let us start with the demand side. In a large, growing market like 3D Printing, the potential buyers are in the millions (if you include the consumer sector), spread all around the world, all of which will have different use cases that drive a variety of needs as well as buying practices.

On the supply side, even the largest company only has finite resource to serve a market. Given the huge variation in potential customer requirements in each market served, market segmentation is needed as a compromise between mass marketing (treating everyone the same) and one-to-one marketing.

Whilst an organisation can grow using a more intuitive approach to customer development (indeed this is sometimes desirable in an emerging market), assuming there is an ambition to scale up and avoid stagnation, thinking through a tailored market segmentation is critical.

How is it done?

Market segmentation is a creative and analytical process that involves:

So much for the theory. How is the 3D Printing market segmented?

There are several ways in which the market can be segmented: 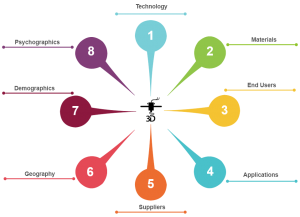 Considering each in turn:

Every organisation will have a unique market segmentation. Typically this can be visualised in a four-quadrant grid with two sets of variables, that fits with their market definition, customer profile, products/services, business model and growth ambitions.

What Are The 3D Printing Market Dynamics?

There are many observable trends within 3D Printing, with industry experts giving their views in a recent 3D Printing Industry article. Arguably the three main dynamics relate to the expansion of uses, business model reinvention and barriers to adoption.

First coined by the German government in 2015, Industry 4.0 is seen as the latest phase of industrial development (source: Wikipedia):

The eco-system of hardware, software and service providers need to continue to innovate to reduce these barriers to help unlock the potential of 3D Printing.

Is 3D Printing About To Go Mainstream?

The ‘Technology Adoption Life Cycle Model’ developed by Geoffrey Moore (first set out in his book ‘Crossing The Chasm’), is a useful psychographic model that links buyer attitudes to market penetration of a technology product/service.

The concept applies a normal distribution to a given population, then splits it into five distinct customer groups according to level of penetration, each with their own characteristics.

The first two groups, the innovators (technology enthusiasts) and early adopters (visionaries), are most open to new ideas and make up 16% of the market penetration. The R&D departments using 3D Printing for Prototyping would be a classic target segment.

The third group, the early majority (pragmatists) making up 34% of the market penetration, are the most critical due to their size and ability to go beyond the initial, niche applications and represent breaking into the mainstream. These pragmatists are also the most challenging at this stage of market development, as they need more evidence than either the innovators or early adopters, to give them confidence to make big strategic decisions on new uses. For 3D Printing, this is likely to mean moving beyond the heartland of prototyping to develop new revenue streams for after-sales and transforming the business model to switch production methods for end components.

For many technologies, products and services, consumers make up an important part of the market and are needed to truly achieve mainstream status.

AddVantage Strategy commissioned a survey in July 2020 of over 1,600 UK Adults on their usage and consideration for owning a 3D Printer at home, with the key findings: 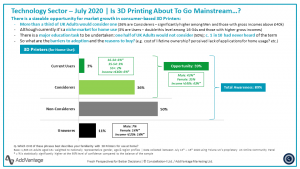 Whilst 3D Printing is far from penetrating the consumer mainstream, more headway has been made with Industry. A survey in April 2019 of 900 global manufacturing companies indicated that 18% now use 3D Printing in serial production of end parts and components, so it has now broken into the Industrial mainstream. 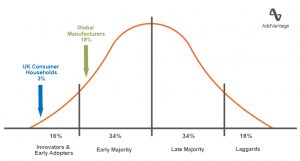 3D Printing is becoming an increasingly important manufacturing process, not least in its support for Industry 4.0, having now broken into the Industrial mainstream through penetration into end parts and components.

There remains much work still to do to overcome cost, accessibility and performance barriers to unlock the full market potential.